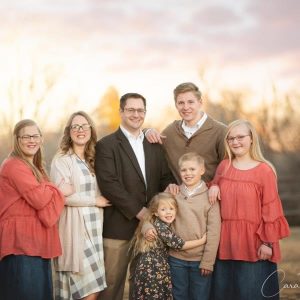 I grew up in a preacher’s home and was taught the Bible as a young child. At the age of six years, on December 29, 1986, I accepted Christ as my Saviour in Pueblo, CO, after a revival meeting that my Dad was preaching. I am so thankful for the Godly influence of my parents and four siblings encouraging me to follow the Lord’s leading in my life.

At the age of 8, I began to sense in my heart a desire to preach the Word of God. It was a desire accompanied by a feeling of fear at the thought of standing and speaking in front of people, but I soon realized that this was God’s call and God’s will for my life, and I surrendered to do so.

In 1993, God led my family to Pampa, TX, when I was twelve years old, and my dad became the pastor of Bible Baptist Church, where he would pastor for the next 25 years.

After graduation from Pampa Christian School in 1998, I moved to OKC, OK to attend Oklahoma Baptist College to train for future ministry. It was at Bible College where I met my beautiful, fun-loving, hard-working wife, Amanda, who came to college from Pasco, WA. We were married on June 7, 2003.

Two weeks after we were married, we were able to go on a five month extended survey trip to Uganda to fill in for my brother, Philip and his family, who were missionaries there, but were back in the States on a furlough at the time. It was an enjoyable time, but it was also a time that God used to reconfirm to us that it was His will to return to Uganda as missionaries.

When we returned from that trip we began making plans to move there as missionaries and to raise the support to be able to do so.

After serving in Uganda for over 11 years, God led us to come back to Pampa in June of 2017.

God has led us every step of the way. He has been and will always be faithful. My life’s verse is Acts 20:24, “But none of these things move me, neither count I my life dear unto myself, so that I might finish my course with joy, and the ministry, which I have received of the Lord Jesus, to testify the gospel of the grace of God.”

I am thankful to have grown up in a Christian home. I was 4 years old when I accepted Jesus as my Saviour. I’m so thankful that I remember that day like it was yesterday! I got baptized when I was 13. When I was 16, I surrendered to do whatever the Lord wanted me to do.

After graduating from high school, the Lord led me to Oklahoma Baptist College where I majored in missions. From the time I arrived to college, I noticed Paul Hudson and wanted to get to know him, so I began to watch him from a distance. I did not think he would take an interest in me, but to my surprise, he asked me to go with him to the Christmas banquet during my sophomore year. We were married a year and a half from that day. From the beginning we knew God had a purpose for us, and we knew when we got married that God had called us to go to Uganda, Africa.

In June 2003, 2 weeks after we got married, we went to Uganda for 5 months. We then moved back to OKC, and I finished my last semester of Bible college. The day after graduation, Paul and I were on full-time deputation going to Uganda. (May 2004)

Departure day to move to Uganda was January 31, 2006 with our small family of 3. Timothy was 1 year, and I was pregnant with Victoria.

During our 11 1/2 years in Uganda, we helped start East Africa Baptist College, Gospel Light Baptist School, an annual Youth Conference, and Lubaga Baptist Church in Lubaga, a suburb of Kampala. Of course, we also gained family and friends who we love dearly. The Lord truly knit our hearts with our church people, and others that we ministered to.

In June, 2017, we accepted the Lord’s leading to come back to the US, and my husband, Paul became pastor at Bible Baptist Church in Pampa, Texas.